I moved to Gujarat

Outtakes from documentary about Anna Irbe.

Latvian missionary Anna Irbe came to India in 1924. This film is about discovering footprints she left in this country during my motorcycle trip in 2021. I also included short scenes with places to visit on the way. Srirangam Temple complex neat Trichi/Tiruchirappalli, Adiyogi - The Source of Yoga, Coonoor, Dhondenling Tibetan Settlement and Shivanasamudra Barachukki Waterfalls. Motorcycle (KTM Duke 390) expedition in November 2021.
Riši (in Latvian) = Rishi (Sanskrit: ऋषि, romanized: ṛṣi) is a term for an accomplished and enlightened person. They find mentions in various Hindu Vedic texts. Rishis are believed to have composed hymns of the Vedas. Post-Vedic tradition of Hinduism regards the rishis as "great yogis" or "sages" who after intense meditation (tapas) realized the supreme truth and eternal knowledge, which they composed into hymns. The term appears in Pali literature as Ishi and in Buddhism, they can be either Buddhas, Paccekabuddhas, Arahats or a monk of high rank. (Source: Wikipedia).

Two our films has been selected to show at Black Hills Moto Film Festival 2021.

Am I good pillion?
No!
Will I go for another ride as pillion?
No!
This was my first ride ever as pillion. The thing is that I didn't wish it, but I hadn't money for the fuel, so my pal Lubomir (Любомир) instead of giving me some bucks for petrol, offered me to ride with him as pillion. Poor Lubomir, he didn't know what he is getting in. I used to ride with pillions quite a lot, mostly with my wife, also long rides. But she is small and quite light, I never ever had any problem with her, she is perfect, ideal pillion. I time to time even checked with my hand if she is still behind me because i didn't feel that somebody sits behind me. Well, I had also horrible pillions (like me) sometimes. Funniest was one girl who leaned to opposite side on every turn, but I explained her that she must just sit and she was ok after that.
So, I know what is pillion, but Lubomir told me that I always tried to pilot his bike from behind. I tried my best, really, to sit calm and move only with bike, but looks like somehow I subconsciously "operated" his bike. Also I am not small, short, nor light guy. I had freelance project to do, so I took my laptop in backpack - it added me more physical discomfort even I kept it between us. Ha, lucky pillions on Golwings and other bikes with huge coaches!

​This is pilot episode 1. ​This particular episode do not contain any valuable question nor answer. Every next episode will cover answer to some useful information for bikers, and not only, who are planning to come to ride and/or travel in India. All episodes will be published on my FAQ page.

Our film 'Jagannath Tour 2020' Episode 2 has been selected to show at Santa Cruz Moto Film Festival 2021.

After "$#it hit the fan" era is over and we will be able to move around and meet people, we will start production of 'Legendary Motorcycles of India' series.

What I can say about this ride?  Purpose of this ride - to see Tadasa bridge which appears when water level is very low during dry season - failed. We didn't see the bridge and water there was 10 times wider then I saw on photos. So the bridge was still submerged. Looks like the bridge is not visible every year during the dry season and apparently it only emerges in very, very dry years. BTW placemark on google maps is in wrong place I think. It must be there were the old road ends in the water. It is well visible on satellite view.

The place for bikers and not only. Located in North Bangalore.

Ride to Markonahalli Dam with Legendary Legion of Bikers on September 6th, 2020.

This was our last ride before 'S#it hit the fan'.

The ride was AMAZING! We covered together 2000 km from Bengaluru to Mayapur. Then I went back to Bangalore and covered another 3000 km. I was in a bit of a hurry because I had to manage to be back in time before the next ride to Hampi.
This ride was "Karmic" for videography. I lost in the sea in Puri, my Gopro camera with all videos I had taken since we left Bengaluru. The next thing happened after my return - the hard drive with all video files from my friend's camera, died. I still hope to recover the data after the current lockdown ends. This video covers my way back home after I said Good bye to my friends in Mayapur.
Jānis and Laila 'Jagannath Tour 2020 Latvia-India' sponsor Royal Enfield Latvia. 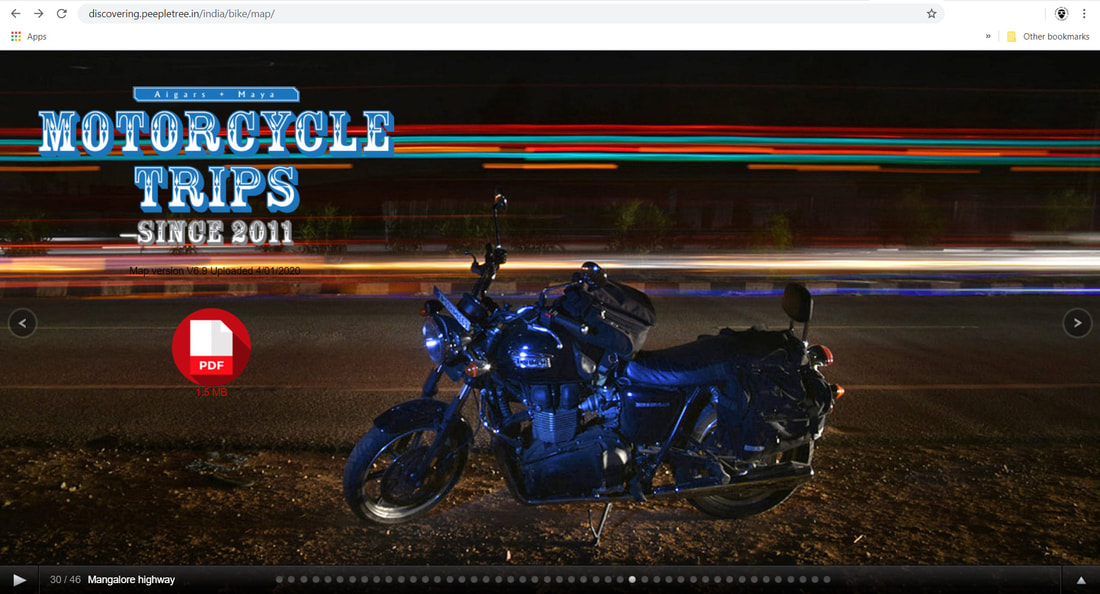 ​Breakfast ride with 50+ bikers club. After that solo ride to explore new places.
​

It was my favourite place to eat. Fish Thali around 100 Rupees!! So sad, they went out of business.
​

This episode is about ride on TET (Trand Euro Trail) Latvia. It was very short and covered only small part of route.
​

This is Episode 1 from 'Conquering Europe 2019'. It is about about Rīga, my hometown, where I used to ride a bike first time in my life. This is actually 4th episode from my this summer journey in Europe. Well, much shorter then I wished, but a lot of fun on the bike. 3000+ km done in so tiny country. Next episode (2nd) will be about Latvia's countryside. Already made: Episode 3 - charity ride with Latvian bikers. Episode 4 - bikers meetup at Madona. Episode 5 - Celebration of Midsummer Eve Festival. Upcoming: Episode 2 - Latvia's countryside; Episode 6 - TET Latvia; Episode 7 - Tallinn (Estonia).
​

On our Youtube channel are different type of videos. Logos and templates are made to upload custom thumbnails.
Aliens Ride - videos about motorcycle rides they organized. Aliens Talk - reviews about motorcycling related things. Film Trailer - for short trailers and teasers. Aliens Watch - motorcycling events where they didn't participate as bikers, but it was they assessment to shoot film. Aliens Take Part - motorcycling events where they participated. Alians Eat - reviews about places to eat or don't on the way. Aliens Everyday - random things from they life. Dirt Forever and Lil' Dirt Ride - for offroad, adventure rides. Latest addittion -  Aliens Laugh - something funny.
​

Short ride, but a lot of fun

It was extended breakfast ride with my friends from '50+ Bulleteers Bengaluru' motorcycle club. BTW, Maria Le Frog have her page on Facebook. ​Major plan for my ride was to test my new rain gear. Done!
​

I crossed this small river several times to shoot this vide. 'Dirt Forever' Episode 12 coming soon. This is not 1st time I was there. Here is short video how I had fun on my Triumph Bonneville some 4 years ago.
​

This is not recent ride, but full version video editing is finished just now. It was 4 days trip to Udupi-Malpe side. We used to stay in the resort and spent two full days exploring areas around.
​

This is Episode 5 from 'Conquering Europe' series.
​

Latest episode (11th) from 'Dirt Forever' series. One day ride to relax and eat in countryside. Yes, and we organize picnic rides. Here are photos from one of them.
​

We took a part of ​Distinguished Gentleman's Ride in Bangalore.
​

It was my job as videographer, not my ride.
​

I took part in bikers' event 'The Bikerni Within 2019' organized by Bengalury women motorcyclists club.
​

I took part in bikers' event 'Responsible Riders Ride 2018'. After that went for solo with my wife.
​